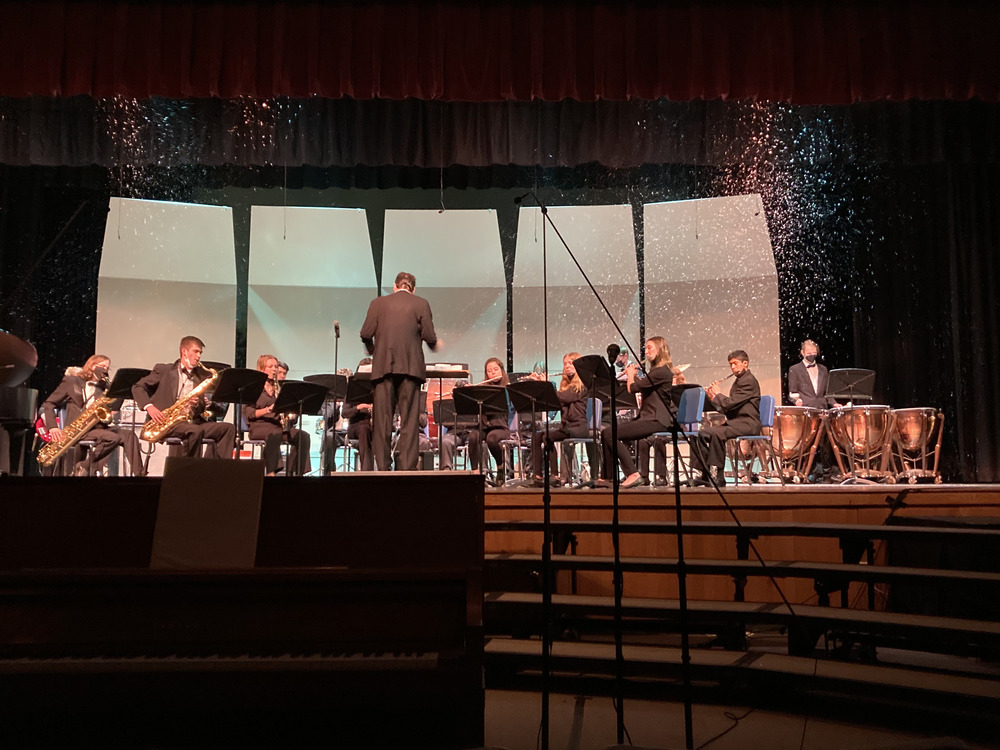 A Successful Winter Concert for the GDRHS Music Program!

By Kyla Hughes - Tuesday, December 7, members of Groton Dunstable High School’s Concert Band, Chorus, Jazz Band, and Chamber Choir performed for viewers in the district’s Performing Arts Center (PAC) for the first time since the winter of 2020.  Due to COVID-19, the last concert was pulled off in May of 2021 on the front sidewalk of GDRHS with the viewers in lawn chairs.  The winter concert prior to that one was held in the gym with no audience besides a live-streamed video.  So, this was the first time any freshmen or sophomores got the opportunity to perform in the usual auditorium.

At 7 pm on that Tuesday evening, friends and families filed into the auditorium to listen to the students’ presentations of what they had been working on for the past few months in their music classes. 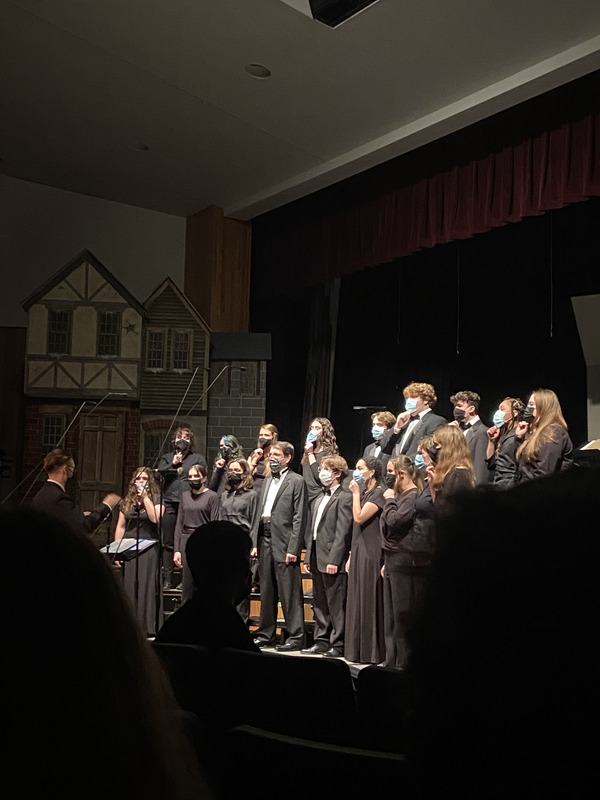 The night was kicked off with Concert Band.  A mix of flutists, clarinetists, saxophonists, trumpet players, trombone players, percussionists, a bass guitar player, and an oboe player made up the musical group.

Sophia Blosil, a senior and the Concert Band section leader of the most played instrument - flutes, shared her excitement to take a step closer to normalcy in the music program.

“It was so wonderful to be performing again this year, to be back in the PAC in an almost-normal setting,” she said.  “I hadn’t realized how much I really missed our concerts until we were given the opportunity to bring them back.”

The group played Invictus by Karl King, Juxtaposition by Micheal Oare, and a festive Let it Snow! Let it Snow! Let it Snow! to get the audience in the holiday mood.  When Let it Snow began, there was a lovely highlight to the performance - it really did begin to snow!  As the song was played through, snowmaking machines turned the stage into a winter wonderland.

Following Concert Band was Chorus, which sang 4 songs in a variety of genres from gospel music to an Eric Whitacre piece to Hey Jude by the Beatles.

Mollymauk Belanger, a senior, has been the student-teacher for the chorus class this semester.  They organized a piece the chorus sang, S’Vivon by Betty Bertaux, and conducted the singers for it in the concert.

“I was really proud of all the kids and being able to work as a pseudo teacher,” Belanger said.  “It has increased my understanding and ability to teach music greatly.”

After a brief intermission, it was time for Jazz Band, a group that requires an audition to get into.  This group sang three certainly jazzy songs, including Haven’t Met You Yet by Micheal Buble.  This song included an auditioned-for vocal solo by Allison Neiley, a sophomore in the Chamber Choir.

Rachel Young, a junior, had a flute solo in one of the Jazz Band’s songs, Backatown by Troy Andrews.  Young was also glad to be back into the more routine swing of the music program.

“It was amazing being back together with our music family in the PAC!”  She said.  Young also mentioned that she was especially happy to have her solo in the “New Orleans funk” piece Backatown “...because that song is impossible to not dance along with.”

To close up the night was Chamber, an honors choir that also requires auditioning to be a part of.  The group sang an array of complex and beautiful songs, including The Conversion of Soul by Z. Randall Stroope, Parting Glass, arranged by Desmond Early, and even a contrasting Bohemian Rhapsody by Freddie Mercury that seemed to be a crowd favorite.

Overall, the performance was a success.  The Concert Band, Chorus, Jazz Band, Chamber Choir, and all the members involved constituted a music-filled night of entertainment to showcase all they had been practicing - proving their months of hard work certainly paid off.